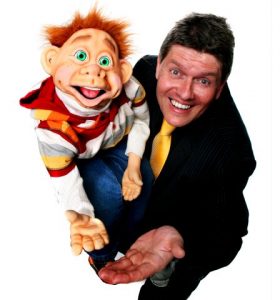 John Kimmons A.K.A. ‘Kimmo’ has spent all of his working life in show business, beginning his professional career at the tender age of 15.
He is hilariously funny, incredibly talented, devastatingly handsome and probably the most popular entertainer ever to walk this Earth. He also wrote this biography.
John’s first big break came in 2008 at Blackpool Opera House, when he took on the best in the business and was awarded the title of ‘Children’s Entertainer World Champion’ and became the first children’s act to receive the prestigious Ken Dodd Award for Comedy. Since then he has been in great demand both as a comedy act and as a lecturer and consultant to other entertainers.
Kimmo is equally at home performing for adults, children or family groups. in recent years he has travelled the world as guest entertainer on some of the world’s largest cruise liners, performed twice at the world famous Magic Castle in Hollywood and made television appearances on CBBC’s ‘The Sorcerer’s Apprentice’ and ‘The Slammer’.
The act is fresh and different, not to mention good clean family entertainment. Watch and laugh as a hand towel becomes a shrieking baby and drawings come to life, but watch out – you may find yourself part of the show!