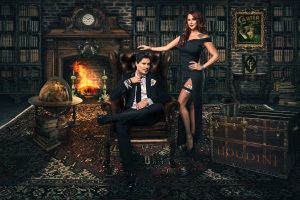 Join BMC on this one of a kind night with top illusionist Christian Farla
Christian Farla has been named the best illusionist in the world for the third time by the International Magicians Society (IMS) on May 13. A special achievement because he is the only one in Europe to have won no less than three Merlin Awards. Farla was presented with the award by IMS president and founder Tony Hassini, who traveled to the Netherlands especially for the award ceremony. Great illusionists such as David Copperfield and Siegfried & Roy previously won a Merlin Award.

Christian Farla’s career started when he won his first prize at the NMU Junior Magic Championships at the age of 12. He has since grown into one of the world’s greatest illusionists. Farla has made five international theater tours, ten million YouTube views and TV appearances with a total of 50 million viewers to his name. His talent has already been noted by the IMS: in the past, his work has been awarded the Merlin Awards for “Magician of the Year” and “Magic Show of the Year”.