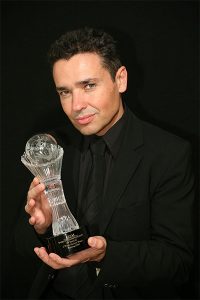 Marc Oberon is an English magician based in Nottingham; specialising in artful stage, close up and mentalism magic. Performing internationally as well as innovating and developing new magic for other performers worldwide. Marc is a significant fixture in the pantheon of world-class magicians.

He is the most highly awarded magician in British competitive history – Marc has won All of the most significant magic competitions.

Marc is a Gold Star Member of the Inner Magic Circle, his philosophy of Magic is encapsulated in his book “Grips, Lines & Looks – A Theory of Magical Choreography.”

He is regularly invited to lecture to magical societies all over the world to speak on his unique approach to performance.

An innovator – Marc has designed and invented many magical effects that are used by professional magicians world wide.